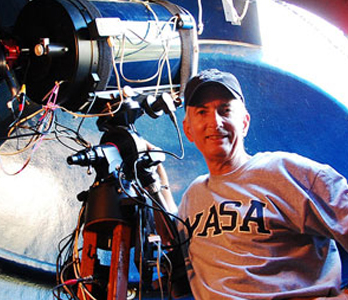 Richard Nolthenius has been head of the Astronomy Department at Cabrillo College in Aptos, CA for the past 30 years. He earned his PhD in Astronomy and Astrophysics after doctoral work at Stanford University and UCLA.

He was a member of the Thermodynamics Group at General Dynamics in their space program in San Diego, doing thermal analysis and design for the Atlas/Centaur rocket missions and space satellites. His post-doctoral work involved galaxy clustering algorithms and comparisons between numerical cosmological simulations and real observations. He was a visiting researcher and lecturer at UC Santa Cruz.

His research papers have ranged from computer modelling of fluid systems, applying chaos theory to the nature of barred spiral galaxies, determining the dynamics and mass distribution of the Andromeda Galaxy, assessing the validity of alternative theories of Dark Matter by developing galaxy clustering statistical measures, getting observational data on the morphology of asteroids using stellar occultations, and determining the Fundamental Plane of general dissipative galactic systems and the relation to the formation and evolution of those galaxy systems. In 2009 he shifted his focus to the study of climate change, creating a website systematically debunking the climate denial claims which he became aware of at Cabrillo College and being promoted by right wing and fossil fuel interests elsewhere.

He created a new course “Planetary Climate Science”, first taught in 2012, which details the physics of planetary climate in general, Earth’s past and future climate, and the connections with physics, economics, and human nature. Since 2015, he’s been examining the Thermodynamics of Civilization itself and how this constrains our climate mitigation options, extending the pioneering work of Prof. Tim Garrett in this new field. Since 2009, Rick’s focus has been on the science of climate change and its relation to the political/economic systems.