If you look at the media landscape today, you could hardly be blamed for not recognizing that there is an existential crisis looming.

But there is: If humanity doesn’t get its act together in the next three years, we will almost certainly face catastrophic sea-level rise, drought, famine, and widespread displacement — the most disastrous effects of climate change.

That is the consensus of a growing body of scientific literature and the point of a new commentary in Nature magazine from renowned climate experts including Christina Figueres, former U.N. climate chief. The comment, titled “Three years to safeguard our climate,” is not designed to terrify, but it might, despite its focus on opportunity. 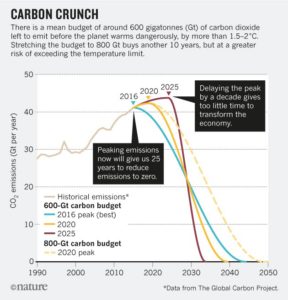 “We stand at the doorway of being able to bend the emissions curve downwards by 2020, as science demands, in protection of the UN sustainable development goals, and in particular the eradication of extreme poverty,” Figueres and her colleagues write. “This monumental challenge coincides with an unprecedented openness to self-challenge on the part of sub-national governments inside the U.S., governments at all levels outside the U.S., and of the private sector in general. The opportunity given to us over the next three years is unique in history.”

If we miss this opportunity, we will blunder into something truly unique in history — the end of the liveable climate as we have known it over the past millennia — or we will be forced into the nearly impossible and economically crippling task of zeroing out all global emissions in a very short period of time.

Meanwhile, the Trump administration is celebrating Energy Week by rolling out a number of new initiatives to extract more fossil fuel out of the ground and increase employment in that sector. (Forget that more people work in solar energy than coal mining. Forget how hard employment will be with grounded airplanes and submerged cities.)

The United States is the second-largest greenhouse gas emitter — and the largest historically — but it is being led by a full on climate denier. And by the time Trump’s term is over, it could be too late.

“The year 2020 is crucially important for another reason, one that has more to do with physics than politics,” the experts write. “When it comes to climate, timing is everything… should emissions continue to rise beyond 2020, or even remain level, the temperature goals set in Paris become almost unattainable.”

The goals from the 2015 Paris climate agreement were not randomly selected. Preventing a 2°C (3.6°F) temperature increase was selected specifically to avoid “the most catastrophic” effects of climate change. Already, humans have caused nearly 1°C of global warming — halfway there. The comment’s authors note:

After roughly 1°C of global warming driven by human activity, ice sheets in Greenland and Antarctica are already losing mass at an increasing rate. Summer sea ice is disappearing in the Arctic and coral reefs are dying from heat stress — entire ecosystems are starting to collapse. The social impacts of climate change from intensified heatwaves, droughts and sea-level rise are inexorable and affect the poorest and weakest first.

The thrust of the three-year argument is that there is an certain amount of carbon the atmosphere can contain while keeping temperatures stable. The more quickly we stop emitting them, the longer we have to reduce emissions to zero. The later we wait, the less time we have.