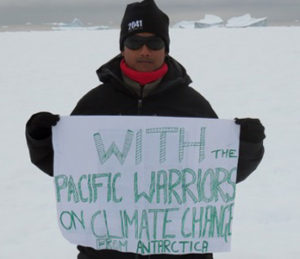 Rituraj Phukan is an environmental activist and writer based in Assam, a biodiversity rich, climate impacted province in the far east of India. A commerce graduate, he quit his government job to begin a lifelong engagement with nature, travelling, writing and teaching students about the environment, wildlife and climate change.

He is Secretary General of Green Guard Nature Organization, a grassroots civil society group working with fringe forest communities to explore and establish sustainable solutions for management of man-animal conflict.

He also serves as the Chief Operating Officer of Walk For Water, a group that is leading a global water conservation movement with a mission to provide universal accessibility to safe water.

Rituraj was a member of the International Antarctic Expedition led by Polar explorer Robert Swan, the first man to have walked to both the poles, in 2013, completing a personal leadership and environment sustainability program called ‘Leadership on the Edge.’

He has also travelled to the Canadian Arctic on an Earthwatch expedition called ‘Climate Change at the Arctic’s Edge’ to participate in ongoing citizen science research about the impacts of global warming on the fragile arctic ecosystems, while based at the Churchill Northern Studies Centre.

As the Assam Coordinator for Kids For Tigers, the Sanctuary Nature Foundation initiative for students, he works with schools to sensitize students about the connection between tigers, their forest habitat, climate change and conservation needs and consequences.

Rituraj is the Associate Editor of Igniting Minds, a national magazine for the youth inspired by the late visionary and Indian President Dr. APJ Abdul Kalam. He is a frequent contributor to other publications as well with regular op-eds on environmental issues in leading newspapers. His blog C.A.R.E (Climate Awareness Report for Earth) focuses on climate change impacts on people’s lives, mitigation and adaptations.